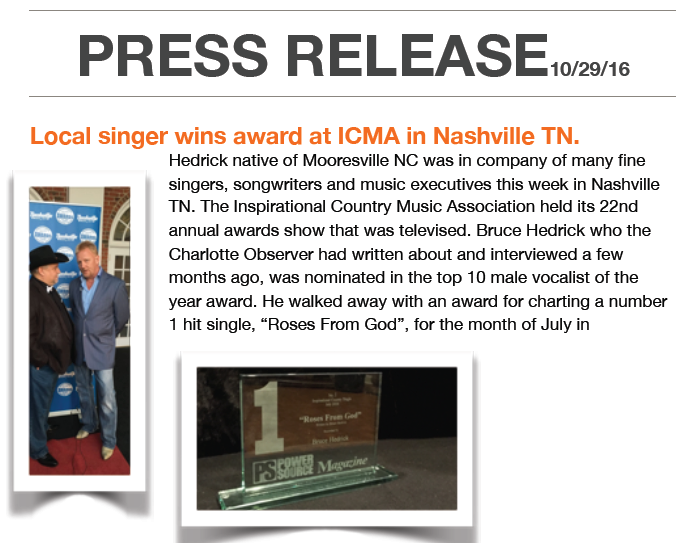 Local singer wins award at ICMA in Nashville TN. Hedrick native of Mooresville NC was in company of many fine singers, songwriters and music executives this week in Nashville TN. The Inspirational Country Music Association held its 22nd annual awards show that was televised. Bruce Hedrick who the Charlotte Observer had written about and interviewed a few months ago, was nominated in the top 10 male vocalist of the year award. He walked away with an award for charting a number 1 hit single, “Roses From God”, for the month of July in PowerSource Music Magazine. His current single “Gravy”, held number one for 3 straight weeks on another chart in August. It is currently number 10 on PowerSource and was showcased at the HardRock Cafe in downtown Nashville this summer. Country music singers Marty Rabon from Shenandoah, Colin Raye, and Mark Wills were some of the other artist that attended and performed. “Roses From God” has a video on YouTube that won a Telly award for its cinema photography film work, which was produced by Tim Vogul in the Lake Norman area. To contact Bruce Hedrick for more photos and information call 9807219849. www.brucehedrickmusic.com

~Reprinted from CharlotteObserver.com~ ORIGINAL ARTICLE LINK Bruce Hedrick is riding a wave of success with…

Awesome time last night filming the new season material.  You can catch this on Daystar…

Jim, WGDN 103.1FM in Michigan just aired a radio call in of Bruce Hedrick that…